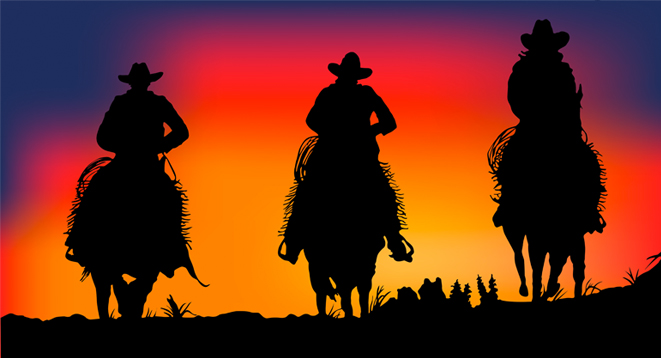 Hang up your cowboy hat - the social impact goldrush will soon be over, hopes SROI sheriff Jeremy Nicholls.

We believe that we humans are a rational bunch, making decision based on evidence, carefully collected and properly checked. Not only as individuals making sensible, informed decisions but also when we get together in groups and organise ourselves in things like businesses and social enterprises. In business we build the systems to create information we need to make good decisions.

In fact nothing could be further than the truth. As human beings we are hard wired to make decisions based on our preconceptions. We delude ourselves at every opportunity. Worse still we don’t realise it and we don’t believe it. We are great at self delusion.

It must be us

We work backwards from our objectives in order to confirm our assumptions. Where we want what has happened to be the result of our actions. We do this in our daily lives when we think about our decisions and we do this as organisations thinking about the effects of our activities.

The more the merrier

We believe that if everyone around us shares a view, this is evidence that the view is correct. The more people that share the view, the more likely it is to be correct. It won’t take a second to realise this can’t be true – just think about opposing fans of football teams reporting what they think they have seen in the same game.

We are all at it – predicting the future based on our analysis of the present. Mostly in ways that do not stand up to scrutiny.

Carried along on wave

We think we know when things that happen are not related, where there is no cause and effect. In fact, we are always drawing conclusions about cause and effect – whether this is in astrology, religion, superstition, gambling, stock market investments – we are all at it, predicting the future based on our analysis of the present. Mostly in ways that do not stand up to scrutiny. And we do this again in organisations as we conclude that things that change, and especially things that we want to change, must have been caused by our activities. Often we are just being carried along by other things that are happening around us.

We think we take on board other information – especially when it contradicts our beliefs and changes our minds. Well other information that we consider to be correct. And we will find ways to make sure it isn’t correct. In fact by refuting the information we have received the effect is actually to strengthen our own beliefs. Think back to that football argument or the ‘who did the washing up last’ debate. And then we go on and do this in organisations, more easily able to ignore any countervailing information, and carry on doing whatever we are doing more and more convinced in how important it is – and sometimes we even get people to invest in that belief.

Groups of people are even worse as they create information to affirm membership of the group and the difference of others, and groups in businesses are just the same. Though of course no social enterprise management team has ever discussed, in private of course, how much better they are than that group up the road, or than the private or public sector in general simply because of the way they have organised their group.

What a difference a word makes

What is evidence varies from group to group. Our evidence is someone else’s fantasy (and vice versa). Even scientists spend a lot of time arguing about good evidence and then spend large sums of money to make sure they have that evidence, sums that most organisations, making day to day decisions, just won’t have.

Fortunately people are wise and know these failings and so, as a society, we have developed systems to stop our tricks. Of course as individuals we wouldn’t fall prey to these risks but we know that others do and, so, are willing to go along with some shared requirements to offset the risks.

Scientific method is our main protection. Its tests for cause and effect, making sure that anyone’s conclusions can be replicated under the same conditions, testing whether a hypothesis is correct, or at least whether the results are within tight confidence limits. Great stuff if we can afford it but plenty of opportunity to use research to justify actions where the research or the conditions under which it was undertaken are very different to our situation.

Audit is a lower test than scientific method but it’s an amazingly powerful test, good enough most of the time. Financial audit, one example, is designed to stop our wildly enthusiastic business from carrying on trading when it really needs to stop, to stop the businesses optimistic view that any income belongs to the business and all costs belong to someone, which would of course overstate the amount of money that the owners can take home or the charity can distribute to its beneficiaries. This is the process that makes a set of financial accounts credible enough that investors can make reasonable decisions. It’s based on reasonable judgements, independent professional judgements. Without it, financial accounts wouldn’t be credible and the level of investment in business would drop off a cliff.

Unfortunately, neither approach is that prevalent in the boom town of social impact where the next gold strike is just around the corner and where stories of massive social impact are only exceeded by the lack of any evidence to support them. Scientific method is being used to assess large scale interventions and tell us what works but it won’t be possible for all organisations to use this approach for what should become their regular annual report. This is where we need the assurance or audit of social impact reports

It does seem extraordinary that investors take the need for audited financial accounts for granted, as a standard part of due diligence – and yet are happy to take stories of social impact at face value. And without audit that is what they must be….stories.

Full of all these, very human, risks.

The problem is that in the world of financial audit the person that is being protected is the investor, who can move their investment elsewhere if the business is underperforming – underperforming compared to other organisations as well as losing money. In the world of social impact the person who is expected to get the social return cannot move elsewhere, cannot complain, has no power and remains unprotected. Until this accountability gap is closed claims of social impact will inevitably and inescapably exceed reality.

Evaluation is not the same thing as audit. Evaluation is rarely independent, often reporting to the managers of an organisation. Evaluation reports are generally not public documents setting out an opinion on the reliability, accuracy and most importantly, the completeness of the information in a social impact report.

There are some glimmers of hope. There is more discussion on the importance of audit and assurance. At the moment this seems to be driven more by social enterprises and organisations delivering social value, perhaps as their board become more involved, than by the investor community. RBS SE100 ratings now include independent assurance of social impact reports as a requirement for getting onto the short list for the impact award.

More needs to happen but hopefully the gold rush will soon be over.